Colin Butcher OAM is for longstanding service to the rail industry. Colin won the RTSA Individual Award in 2018, for his lifetime achievement in providing technical expertise in locomotives, passenger cars and freight wagons, and his long service as a manager within a variety of organisations. His technical ability includes all aspects of vehicle design and performance for most Australian states, and countries in America, Asia, Europe and the Middle East.

Author of a number of publications, including:

Awards and recognition include: 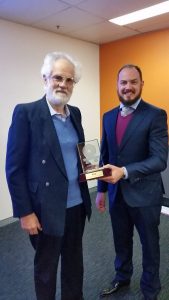