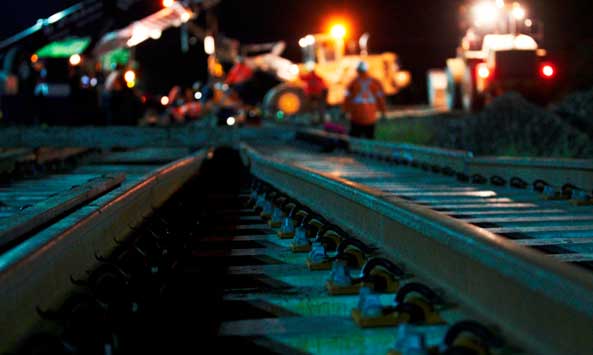 The VIC/TAS chapter of the RTSA is based in Melbourne, and has a membership in excess of 350. The diversity of our membership is one that reflects the railway engineering environment in Victoria and Tasmania.

THE RTSA VICTORIA CHAPTER HOLD TECHNICAL PRESENTATIONS AND SITE VISITS THROUGHOUT THE YEAR. THEY COVER THE FULL SPECTRUM OF RAIL OPERATIONS, CONSTRUCTION AND MAINTENANCE ACROSS AS MANY DISCIPLINES AS WE CAN.

The Victorian/Tasmanian Chapter holds a meeting on the third Wednesday of each month at Engineers Australia CBD premises (Level 31, 600 Bourke St, Melbourne). It is the same location where we hold most of our presentations. The chapter also co-hosts several events each year with other organisations such as IRSE and RTAA.

The metropolitan network is operated by Metro Trains Melbourne (MTM) and is made up of 5 groups, being the Burnley, Caulfield, Clifton Hill, Northern and Cross City, which together encompass 16 railway lines; Lilydale, Belgrave, Alamein, Glen Waverley, Pakenham, Cranbourne, Sandringham, Mernda, Hurstbridge, Sunbury, Craigieburn, Upfield, Frankston, Werribee, Williamstown and for special events would be the Flemington Showground. The regional network is operated by V/Line and is made up of 5 lines; Ballarat, Bendigo, Geelong, Gippsland and Seymour, with the longest shared metropolitan track between the city and Pakenham, along the Gippsland line.

Melbourne is currently living its major influx of railway projects, from level crossing removals, to building a new tunnel under the CBD to increase capacity and reduce congestion through the current city loop. The state is also procuring new high capacity metro trains (HCMT) to utilise the new tunnel providing a direct link between the current Pakenham and Sunbury lines. There are also significant signalling upgrades in progress, with the introduction of the high capacity signalling project (HCS) that will increase number of trains per hour for more frequent travel with less congestion on the train.

RTSA Victoria/Tasmania chapter works with all these major projects and their industry participants, as well as further afield, to bring in expert speakers to events who can discuss the latest innovations used, and identify lessons learnt through seminars to benefit current members on the latest in the railways.

It is good time to join this growing technical society, to learn what is new in the current major projects, develop technical and complementary skills, as well as networking through our events to build your professional career.