Professional of the Year Award 2020

THE RECIPIENT OF THE 2020 RTSA PROFESSIONAL OF THE YEAR AWARD IS ANDREW HUNT.

Andrew Hunt is awarded the RTSA Railway Professional Award for 2020 for his leadership in railway engineering in New Zealand. A mechanical engineer, he has undertaken many roles in KiwiRail and its predecessor organisations since starting as a graduate in 1983, including rolling stock design, development of innovative freight solutions, railway operations, locomotive and rolling stock asset management and recently in setting and maintaining operating and safety standards for rail vehicles operating on the KiwiRail network. Andrew has always applied a professional considered approach to each challenge in his career, thoroughly researching issues and options prior to proposing and engaging on solutions. In his current role he has stood out by his adherence to the need for high safety standards and for these to not be compromised by political and operating imperatives. He led the work to establish the RTSA New Zealand chapter in 2007 and has had numerous roles at chapter, New Zealand and Australasian levels. One of his more significant RTSA contributions was to CORE and he played a key role in bringing CORE 2010 to Wellington and subsequent to this as a leading member of the CORE advisory group. Andrew is a consummate professional engineer and a well-deserved inaugural winner of the RTSA Railway Professional Award. 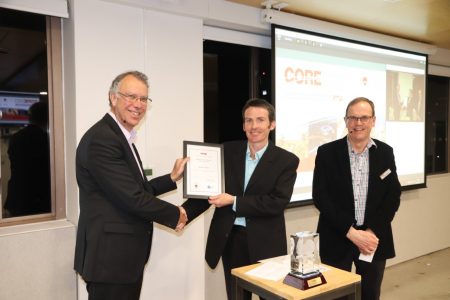