THERE ARE TWO RECIPIENTS OF THE 2017 RTSA YOUNG RAILWAY ENGINEER AWARD, BEING: MR. BRENDEN CASSELLS AND MR. MICHAEL CROCKER.

Mr. Brendan Cassells has a B.E. and a Bachelor of Business Management, and is a Chartered Professional Engineer with 9 years of rail experience. Since joining Arup in 2010 he has built up an impressive resumé specialising in track design and rail civil works, including such projects as Gold Coast Light Rail, Cross River Rail, Victoria’s level-crossing removal project, Sydney Metro, the DSK Dream City Tramway in India and the Auckland Light Rail project.  He has co-authored 2 technical papers including one presented to CORE 2014. He was a recipient of the 2008 ACEA Queensland Youth Scholarship. He has mentored two younger engineers in slab track design, and delivered a Track Design workshop at a Hong Kong university. He has also participated in a high-school-based Learning for Life program.

Mr. Michael Crocker has a Bachelor of Engineering, a B Com. and a Certificate in Energy Studies. He is a Project Engineering Officer with PTA in Western Australia, and has notched up many successful projects including SCADA installations, Coordinating Project Engineer for the Claremont underground car-park building, worked on the radio replacement project, and ATP type approval and a road-widening project on railway land. He also represented PTA in a significant future transport planning exercise for Perth.  Michael presented a paper at CORE 2016 and has submitted another for CORE 2018. He is an RTSA member and has done a stint as Treasurer of the WA Branch. He coordinates the University Challenge and has made presentations at universities, as well as mentoring students, junior engineers and planners. 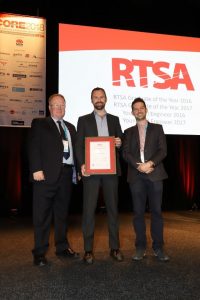