THERE ARE TWO RECIPIENTS OF THE 2016-17 RTSA YOUNG RAILWAY ENGINEER AWARD, BEING: MR. HENRY HUNYH AND DANIEL PRICE.

Mr. Henry Huynh is a Professional Engineer with Aecom Australia in Perth. He has a Bachelor of Civil Construction from Curtin University, with honours, and soon after started his professional railway career as a Civil Engineer in the rail and transportation business line with AECOM in Western Australia.  Henry has been involved in a broad spectrum of projects in rail industry from freight and rail to transit, including light and passenger rail. These projects include maintenance of electric and diesel rolling stock, depot facility studies, kinematic envelope modelling, track safety and fire assessments. Outside of rail he has also worked on the flood recovery program in Queensland, cycling plan for WA, timber bridge inspections and design in metro and southwest WA, and drainage/waterways.  Henry has also been active in contributing to the wider railway industry through various RTSA and EA presentations, team bonding events, volunteering and promoting rail engineering in schools at career days, and advocating students at university through presentations and open days.

Mr. Daniel Price is a Senior Engineer with ARUP in Brisbane. He has a Bachelor of Civil Engineering from the University of Newcastle in NSW. Daniel is a Chartered Engineer & Registered Professional Engineer of Queensland, and has worked in the rail industry for over 8 years.  Daniel has worked on major projects in both Australia and the UK with a number of various clients and rail operators including Queensland Rail, Metro Trains Melbourne, London Underground and Network Rail. Through multi-disciplinary projects he developed his skills in permanent way and alignment design, whilst maintaining core civil elements to appreciate the effect his designs have on other railway disciplines. Daniel also has significant site experience which enabled him to gain an appreciation of the effect of his designs on constructability, cost, and safety risks. 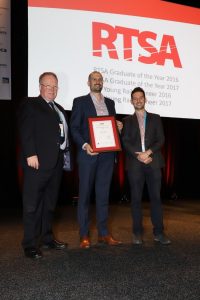