THE WINNER OF THE 2016-17 RTSA GRADUATE ENGINEER AWARD IS MR. JAMES DONOVAN

Ms. James Donovan graduated from Deakin University in 2015 with a Bachelor of Civil Engineering. Having started the MTM Graduate Program in January 2015, he worked through a number of different areas in the business and was involved in a number of projects within the Infrastructure and Engineering divisions.

James biggest achievement is the implementation of the Remote Isolation System, which is in development, and aims to drastically reduce the time taken to isolate the 1500V DC Electrical Network at Metro Trains Melbourne. This project has given James an understanding of the cross-discipline requirements, including electrical overhead and substations, control and indication, signalling, and structural.

James also co-authored a technical paper “A Remote Overhead De-Energisation and Earthing System for the Melbourne Underground Rail Loop”, and presented on the topic at the 2016 Conference on Railway Excellence in Melbourne.

James is making progress towards Chartered Professional status which he expects to achieve over the next year. 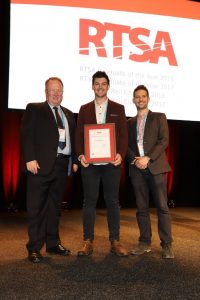